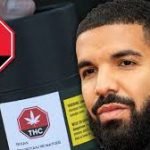 According to MarketWatch, “The image included with the trademark filing appears to be an exact replica” of the warning label required by Health Canada for all products containing THC.

Health Canada debuted the symbol, which it trademarked in Canada, in March 2018 as part of its original draft packaging regulations. Shortly thereafter, Conservative Senator Denise Batters rallied against the symbol during a Senate legal and constitutional affairs committee meeting.

“When I saw that symbol, I immediately thought, ‘That really looks like the Team Canada hockey logo,’” Batters told the committee, brandishing a picture of the Team Canada logo. “I guess you could have just put instead of ‘Canada here, ‘Cannabis.’”

Eventually Batters gave up her opposition. Now Drake’s Dream Crew has filed paperwork saying it intends to reproduce the image on apparel (shoes, hats, and suits), but Health Canada is unamused.