Ah, Black Friday. The traditional start to shopping season that signifies the point in which retailers move out of the red and into the green. And with the advent of legal retail cannabis shops, Thanksgiving week has also become an important sales time for dispensaries. Interestingly, cannabis retailers are seeing the day before Thanksgiving as the biggest jump in sales for the week, leading them to designate it as the new retail holiday Green Wednesday.

Sales figures from dispensaries show that it’s an apt nickname for the day. According to data collected by Headset from cannabis retailers in California, Colorado, Nevada, and Washington, last year’s sales on Green Wednesday at dispensaries increased by 63 percent over an average of the previous four Wednesdays. In contrast, sales on Black Friday were up 21 percent over the previous four Fridays.

Online shopping for pot also spikes on Green Wednesday, which is also being referred to by some in the industry as Weed Wednesday. Data from pot web portal Jane shows that the number of visitors to the site jumped more than 18 percent compared to the average number of visitors over the previous four Wednesdays. But what’s behind the spike in sales on Green Wednesday? To find out, we checked in with some leaders in the industry to get their take on the emerging retail holiday. 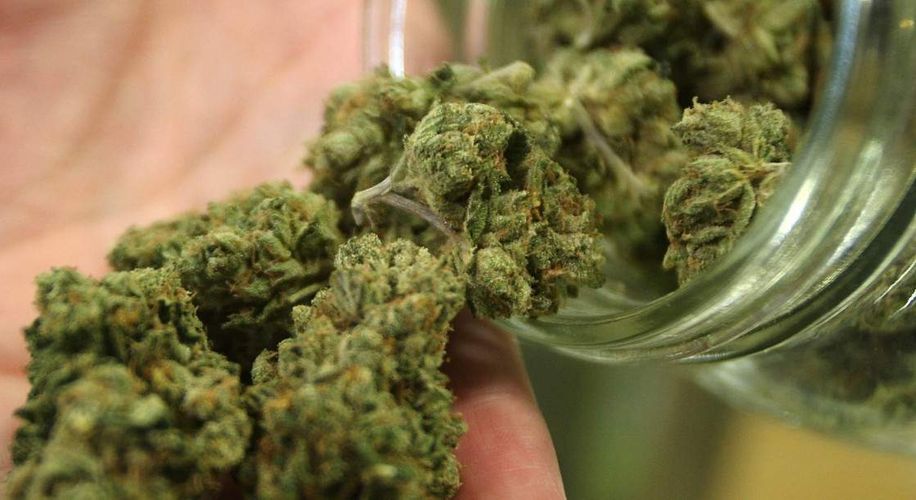 What’s Behind the Jump in Sales?

Pedro Fonseca, the general manager of Harborside in dispensary Oakland, California, attributes the jump in sales on Green Wednesday to several factors.

“We get a combination of things,” Fonseca said. “We get people who are just in town visiting family and they need to be able to get some things so that they can deal with their family. And we get people who are stocking up because they know we’re closed the next day.”

Paul Hartje, the director of customer experience at Seed & Smith in Denver, agrees, noting that “in Denver, a lot of the dispensaries are closed on Thanksgiving. So on that Wednesday before, a lot of people are stocking up.”

Both Harborside and Seed & Smith are near major metropolitan airports and the fact that the day before Thanksgiving is also traditionally the busiest travel day of the year means that the retailers also see plenty of folks from out of town, many of them visiting from states without legal recreational pot.

“A lot of people are coming in town to see family members, so they’re not usually in our state and able to partake,” says Hartje.

And once the customers are in the store, he adds, many grab enough to get them through the hustle and bustle of the long holiday weekend and the potential for wintry weather in Colorado.

“With bad weather, people don’t want to get out, so they typically want to buy a lot of things on Wednesday, stock up, and that way they can to stay home and be safe during the holiday,” said Hartje.

The increase in sales on Green Wednesday isn’t restricted to adult-use cannabis retailers, however. Last year, medical marijuana provider Harmony Dispensary in Secaucus, New Jersey, saw an increase in sales of more than 50 percent the day before Thanksgiving, compared to the average Wednesday.

“We believe the increase in sales is due to pre-purposes given the dispensary being closed on Thanksgiving,” says Niko Galina, the dispensary manager at Harmony. “Our patients indicate that cannabis helps make holiday preparations easier to manage and family time more enjoyable by minimizing the symptoms for which they are being treated.”

The products that customers are buying at dispensaries hint at another factor that’s behind the growing popularity of Green Wednesday. With all of the visiting with friends and family going on for the holiday, many in the cannabis fam are looking for ways to keep their consumption on the down-low.

“We see a huge uptick in things that don’t smell, the more concealable things,” Hartje said. “The vapes are one thing, edibles are another.”

The numbers from Headset back up his observation. Cannabis-infused beverages saw the biggest spike in sales on Green Wednesday last year, with an increase of 101 percent over the previous four Wednesdays. Edibles weren’t far behind, showing a jump of 85 percent. 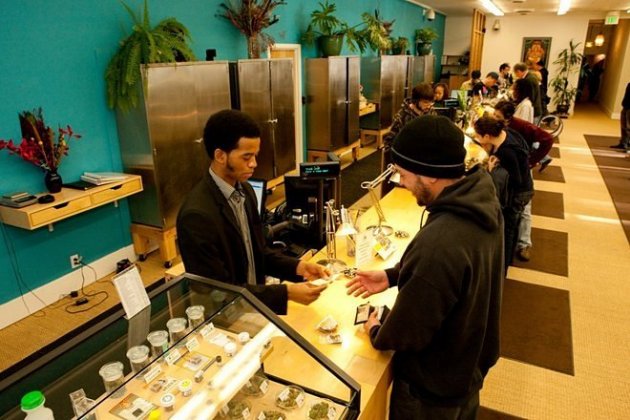 Dispensaries are taking Green Wednesday seriously, upping their promotions for the holiday weekend and bringing in extra help to handle the uptick in traffic. At Harborside, for example, special deals for Green Wednesday are incorporated into the dispensaries weekly promotions. Last year, the average discount applied across all product types was 9.8 percent, an increase of 5 percent over the usual average of 9.3 percent, according to Headset.

“There are some more promotions,” Cy Scott, the CEO of Headset explained. “It’s not on the level of something like a 4/20 promotion, where we’re seeing some significant increases in the number of discounts, but there is a slight increase in the discounts that happen on a Green Wednesday versus a typical Wednesday. But it’s not really at the level of what you see on maybe a more traditional holiday.”

To deal with all the extra shoppers eager to get their hands on Green Wednesday deals, dispensaries also prepare for the busy day by scheduling extra employees to deal with the additional traffic. At Harmony, Galina says the staff of 10 that’s scheduled for an average Wednesday will be upped to around 17. And at Harborside, it will be “all hands on deck,” according to Fonseca, who has nearly three decades in the grocery industry, where the day before Thanksgiving is one of the busiest days of the year. 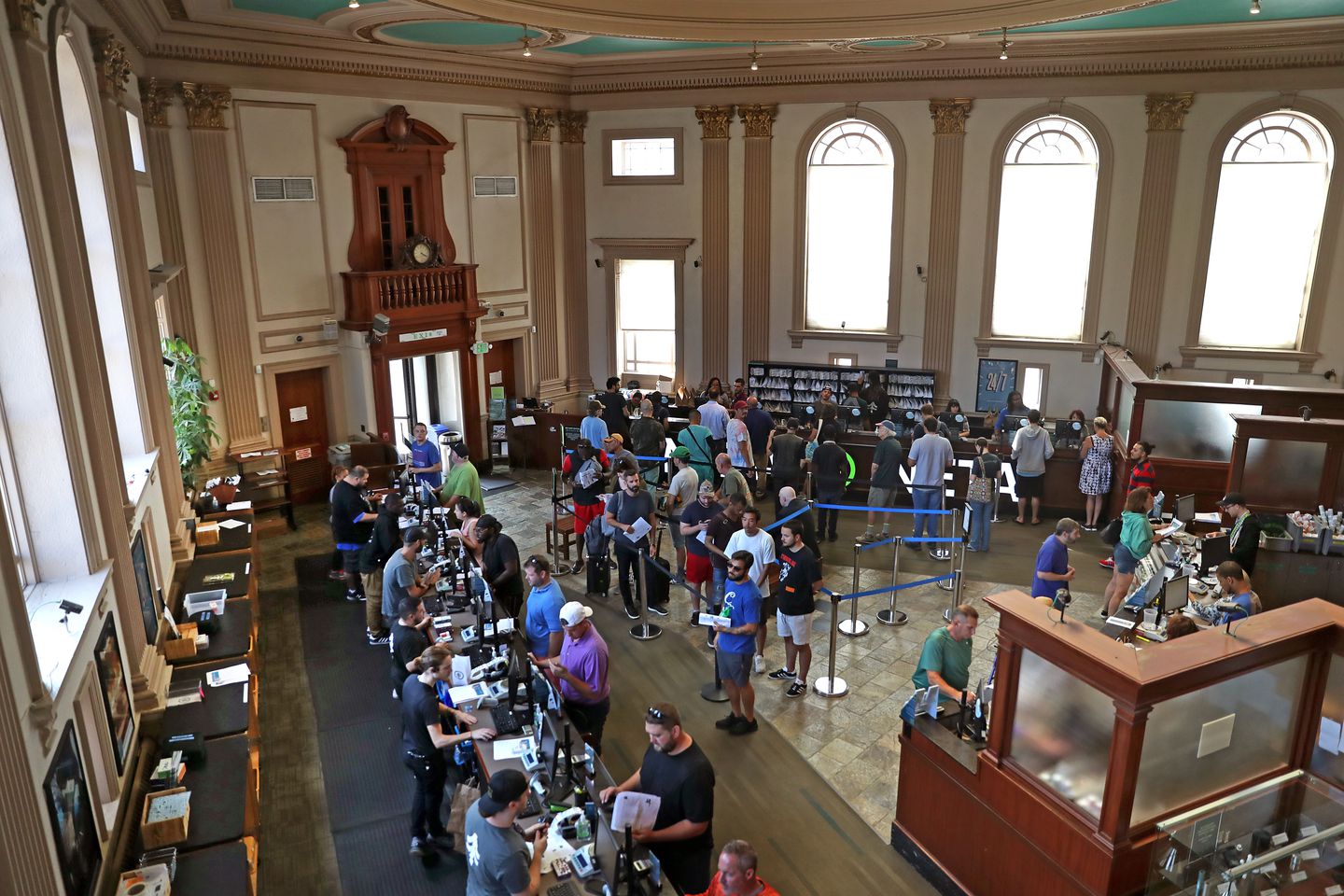 To fill the extra shifts for Thanksgiving week, many businesses in the retail marijuana supply chain need to hire additional staff. Karson Humiston, the CEO and founder of Vangst, a cannabis industry recruiting and staffing firm, says that the days before and after the holiday “are two of the most profitable cannabis retail days aside from 4/20. As these are retail-focused events, we typically see the largest increase in budtender hiring. In the weeks leading up to the holidays, we’ve also seen an increase in trimmers, packagers, harvesters and other roles by cannabis companies prepping for the upcoming increase in demand.”

Another factor behind the increase in sales on Green Wednesday over a typical Wednesday is the fact that it’s the last day of a short work week, explained Scott of Headset. Historically, Fridays have been the busiest day of the week at cannabis dispensaries.

“The Wednesday before Thanksgiving is very much like a Friday for a lot of people that don’t work on Thursday and Friday,” Scott said. “And the difference between an average Wednesday versus a Friday is about a 30 percent increase in sales. I think it’s a little bit of that combined with the holiday.”

With all the preparation necessary for a successful Green Wednesday, including staffing, ordering extra product, and managing promotions, dispensary managers and their teams are busy gearing up for a successful retail holiday. Then they’ll have a day to refuel and recharge before Black Friday, which will still be the busiest day of Thanksgiving week. Although Green Wednesday shows the biggest jump in sales, total sales at dispensaries on the day after Thanksgiving last year surpassed the day before the holiday by $1.3 million, according to Headset’s data. Let the holiday shopping season begin!